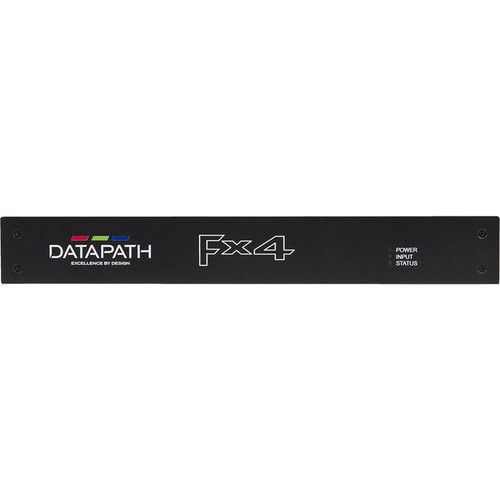 Availablity: 10 in stock
Add to Wishlist

The DATAPATH Fx4 Display Controller with Four DisplayPort Outputs allows you to create and deploy small, mid-level, and large-scale signage projects for retail stores, stadiums, public spaces, and other environments. It features two HDMI inputs, one DisplayPort input, a DisplayPort loop output, and four genlocked DisplayPort outputs. The inputs support up to 4096 x 2160 at 60 fps resolution signals. The outputs support up to 1080p60 resolution. The loop output also supports up to 4096 x 2160/60 resolution and carries the original signal unchanged. There are also two Ethernet ports that allow connecting to a network. Only one port needs to be connected, while the other allows daisy-chaining by looping out. In addition to all these connections, there is a genlocked sync input on a BNC connector that allows syncing with 3rd-party hardware.

Capable of adjusting all scale factors, the Fx4 is designed as a flexible, standalone control device. A different region of the input image can be selected for each output, with cropping, scaling, rotation, and frame rate conversion done internally. The regions can be set to overlap to allow any output to replicate another. The regions can also be configured to support any creative splice of the source material, allowing for non-rectangular screen arrangements as well as varied mixes of monitor orientations.

The Fx4 includes a download of the DATAPATH Wall Designer software for Mac and Windows. Wall Designer is a multi-screen design tool that lets you add new displays, visualize the displays’ content by adding inputs and adjusting regions, and program one or all Fx4 devices over a USB or Ethernet connection.

The Fx4 also allows users to pre-load an image for immediate display in those cases when the media source or cables malfunction and no signal is being received.

Did you find apk for android? You can find new Free Android Games and apps.

There are no reviews yet.